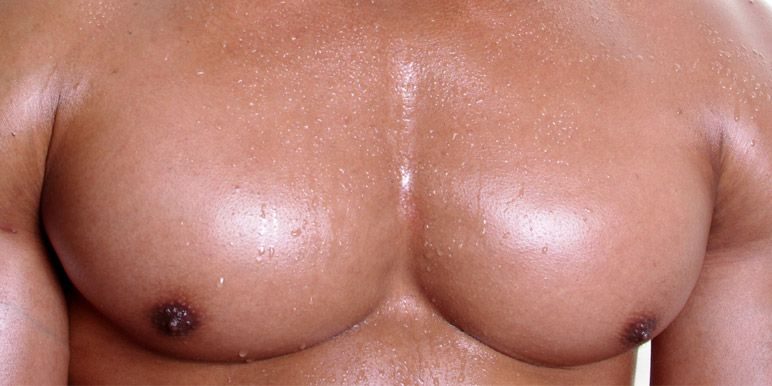 Gynecomastia is a relatively simple condition to understand. It’s when a male chest begins to take a more feminine shape. Gynecomastia literally translates to “woman breast”. It’s usually caused by a hormonal imbalance and a build-up of estrogen. Sometimes it can also be caused by progesterone too.

There is also a condition called Pseudogynecomastia that can affect men, but this isn’t really a form of gynecomastia and can be misguiding. It doesn’t really have anything to do with a hormonal imbalance and is when men have too much adipose (fat) in their pecs. This problem can be solved through losing weight; though it is still annoying and embarrassing as the glandular version of gynecomastia.

When it comes to this glandular gynecomastia, there are three common victims. Surprisingly enough the most commonly affected is adolescent boys. This is because one of the more common culprits is an excess of hormones passed on during pregnancy and birth. Thankfully most people suffering from this version will lose their “man boobs” through puberty. In some 30% of cases, however, it will take surgery to correct the issue.

Older people will feel a similar effect as younger people. As people age the chances of a hormonal imbalance increases. Due to the way skin looks when people are older the condition also looks a lot worse than it does for younger people. For most older people surgery is the only option they have. They can attempt to correct the issue with hormone replacement therapy, but this isn’t a guaranteed answer to the problem.

The people most at risk of developing gynecomastia are people taking anabolic steroids. This is because of the composition of steroids and the effects they can have on the body. Most anabolic steroids are derived from testosterone which means the body converts them to estrogen through a process known as aromatase using aromatase enzymes.

This process can cause an imbalance of estrogen in the body. This estrogen binds to the hormone receptors in the pectorals and causes the body to develop breasts (gynecomastia). Gynecomastia can also lead to puffy nipples. In some cases, men can develop fully grown “bitch tits”.

Many of the athletes taking anabolic steroids do what they can stave off gynecomastia, and frankly if you’re responsible, then you aren’t likely to suffer from it. There are still some people that are so sensitive to the effects of steroids that no amount of preparation will help at all. One of the best methods of prevention is the use of Selective Estrogen Reception Modulators (SERMs). These inhibit the aromatase process and stop the estrogen receptors from working properly.

Athletes have been supplementing anabolic steroids with the SERM Tamoxifen for decades to prevent gynecomastia problems. Nolva works by preventing estrogen from bonding with receptors. It doesn’t actually reduce the production of estrogen; a commonly held fallacy by people who take it.

While this is a good way of preventing steroid-induced gynecomastia, it doesn’t work for everyone, and some people may still need an aromatase inhibitor.

Aromatase inhibitors work by actually reducing the amount of estrogen. It also binds any estrogen left over. It’s not an entirely apt comparison but thinks of Nolva like aspirin and aromatase inhibitors like morphine for preventing gynecomastia. Both of them work, but one of them is much stronger and is the only choice in some cases. The two most common aromatase inhibitors to keep an eye out for are Anastrozole (Arimidex) and Femara (Letrozole).

After gynecomastia fully sets in it can be almost impossible to get rid of it without surgery. This is why prevention is the much better method and why you should take precautions if you’re taking anabolic steroids. If you begin to feel your breast tissue is becoming tender, or you’re developing sore nipples, then you need to start taking Femara as quickly as possible to stop it in its tracks. For this reason, you should always supplement steroid use with small doses of Femara or Anastrozole so things can’t get out of hand in the first place.

Even if you do take this precaution you may be one of the people that can’t even be helped by aromatase inhibitors. If so you will need to have surgery to remove the glands in the chest. It’s usually a quick process. It typically involves an incision in the areola and leaves behind no scars. If there is an excessive amount of adipose in the pectoral region, then liposuction may be needed too.

A method of fixing man boobs that’s becoming more popular as of late is Gynectrol capsules. Gynectrol is made using purely natural ingredients and works to reduce male breast size safely. It uses a unique formula that reduces the amount of fatty cells in the mammary glands.

This product sounds great, but it can’t be used independently like the other options (drugs and surgery) can. What this means is that you have to combine Gynectrol with diet and exercise. The good news is that it does work. It presents a completely safe and cheaper alternative to risky and expensive drugs and surgery.